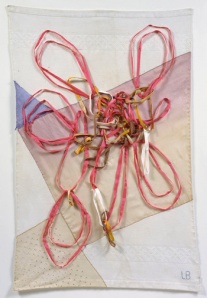 It is a familiar sight at this time of year – a rather large spider has crawled indoors and taken up residency, provoking extreme reactions. The space in question is Hauser and Wirth’s latest gallery on Savile Row, and the gargantuan arachnid is bringing the crowds in rather than sending them cowering. It is the steel centrepiece of the gallery’s inaugural exhibition: Louise Bourgeois; The Fabric Works.

The ‘fabric works’ were created by Louise Bourgeois between 2002 and 2008. They comprise the last body of work the nonagenarian worked on before her death earlier this year, aged 98. Surrounding the spider – produced after its iconic 1999 counterpart, Maman – are the ostensible fruits of her weaving handiwork. As ever, Bourgeois’ late works are extremely autobiographically informed, but the spider (Crouching Spider, 2003) is not a reference to the artist’s own ego, but again to her mother. Bourgeois elucidates by saying:

Like the fabled Arachne from Ovid’s Metamorphosis, fabric and weaving had been an influential motif in Louise Bourgeois’ life. As a child she was surrounded by the textiles of her parents’ tapestry restoration workshop and herself became a life long collector of clothes and household linens. It is these everyday cloth fragments that she has gathered and reworked into geometrically inspired collages. The nostalgic palette of ice cream and baby pastel candy stripe hues are innocently monogrammed with the initials LB, as if collating a trousseau of her life’s memories to take with her in her twilight years. Fabric is a convincing medium for the retelling of a personal narrative: it soaks up atmosphere, covers and protects the body while registering its sweat and tears, all the while inhaling the years of use into its weave.

In another section, abstract collages are stitched together like Modernist sea and sky-scapes. They are reminiscent of the views from Matisse’s window in the south of France, or indeed fabric reinventions of the experimental fields of colour that gave abstract expressionists Rothko and Barnett Newman such critical acclaim and commercial success in the 40s and 50s – eclipsing the endeavours of female artists such as Louise Bourgeois.

It is difficult not to see the work in this exhibition as being part of the canon of twentieth century feminist art; although gallery director Sara Harrison believes that Bourgeois was a lone figure who retained an acute sense of her own identity and aesthetic, and resisted falling in with any movement. She believes that her work is informed by ‘underlying themes of pain and a struggle to come to terms with her complex childhood family dynamic’ (her father made her governess his mistress).

Bourgeois herself was a woman whose artistic importance had been cloaked and concealed until late into her life, eclipsed by her husband’s career as a dazzling art critic. And despite the benign nature of the materials, the show is punctuated by moments of quiet horror, revealing the threatening demons that lurk behind the saccharine façade of female domestic tranquillity. A sinister fabric body (Single 2) – stitched from pieces of black and grey cotton – hangs suspended from the navel, with oversized trailing limbs stuffed like a surreal taxidermied diving suit. Two of the ‘cell works’ also feature; manifestations of caged psychic space in which bizarre and sinister objects reside.

And of course, the duplicitous spider, site of many fears and phobias, and yet symbolic of the weaving and nurturing mother seems representative of the hollow fears at the heart of domestic femininity, the conundrum of sanctuary and a slow death, trapped in its own web of sewing. An outstanding, and psychologically provocative opening for Hauser and Wirth’s new W1 space.

You can see this published here in Glass Magazine

View all posts by catherine mccormack